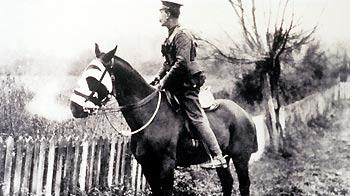 When war was declared in August 1914 we contacted the War Office and offered our services. We supported the Army Veterinary Corps and set up the RSPCA Fund for Sick & Wounded Horses.

We played a vital role in the First World War. We were the only UK animal charity to be recognised and authorised by the Army Council to collect funds on behalf of British War horses. We were also given the great honour of being made an auxiliary of the Army Veterinary Corps.

By 1915, over 50 per cent of our inspectors and other staff were serving with the armed forces. Most enlisted into the Army Veterinary Corps (AVC) and these men initially led the training of new recruits as the AVC expanded.