The most commonly used duck breed in commercial meat production in the UK is the domestic or common duck, in particular the Pekin.

Commercial meat ducks can be reared indoors or outdoors. In the UK, the majority are reared in indoor systems. This typically means several thousand birds being raised together in a building with straw on the floor.

Farmed ducks are given specially-formulated diets and drinking water. However, they aren't always given access to open water for bathing - and if they are, it may not be suitable.

Some ducks, particularly Barbary ducks, may have the ends of their bills trimmed to try to reduce the risk of pecking damage to other birds. However, the most commonly used breed of meat duck in the UK - the Pekin - is not beak trimmed.

Free-range birds are given housing similar to that described for indoor production, but they also have an outdoor range area during the day.

Once farmed ducks are heavy enough for slaughter - around 3.1 to 3.5kg, usually at around 42 to 56 days old - they're caught, placed in transport crates and transported to an abattoir for slaughter.

Find out about some of the key welfare issues for farmed ducks. 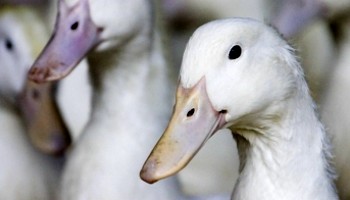 Some key farmed duck welfare issues that concern us.

Some of the ways in which we're working to help improve the lives of farmed ducks. 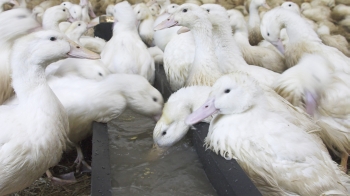 Why foie gras is illegal to produce in the UK.